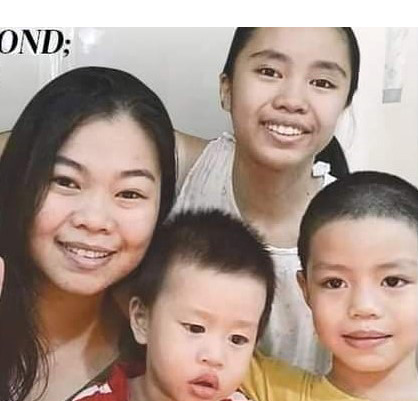 Val Cylde Carvajal is one of thousands of Filipinos who are here in Australia as international student doing additional studies.   They pay hefty tuition fees and endure the loneliness of being away from their loved ones, to pursue their goal of giving them a better lifestyle and also possibly bringing them over to Australia.

After completing Bachelor of Science in Hotel and Restaurant Management in the Philippines, thirty five year old Val decided to undertake further studies in Commercial Cookery in Pax Institute, Melbourme.   He is working part-time as kitchen hand while doing his studies.  He gets his inspiration from the regular video chats with his family.

However, an unimaginable tragedy destroyed Val ‘s aspirations in life.  On August 31,  2021 he lost his whole family in a house fire in Cebu.    He lost his wife Hannah Mae Carvajal, 34yo; and three children Felicity Sachi Carvajal, 12yo; Andre Carvajal, 6yo; and Dan Henry Carvajal, 3yo; as well as his the aunt who raised him, Lilian Carvajal, 72yo.   The other two who perished in the fire were Jen Lyka Lino, 16 and Ivan Mejia, 58.

Sadly, Val would not be able to go home to say goodbye to his loved ones due to the issues of being on student visa, as well as the financial outlay for his fares.

The devastating news was shared with Val’s relatives here in Sydney. His cousin, Julius Carvajal is the father of Juliana, 11 year old singer who performs for community events.  Their circle of friends here includes the sponsors  and participants of the Selfless Love Fundraising Concert which was undertaken by Radio Tagumpay and FCF Life Centre.  FCF Life Centre and the Radio Tagumpay team, and members of a few community organisations for whom Juliana has performed in their events ie Filipino Lesbian & Gay Community (FLAGCOM) and friends, National Alliance of Respectable and Reliable Associations (NARRA), Alliance of Philippine Community Organisations (APCO) and Filipino Women Support Group (FWSG) so far have extended their condolences and given some financial assistance.

The family is appealing for prayers for the eternal repose of those who perished and for Val to have strength to cope with the tragic event. For those who may want to extend some financial help, they can deposit into the bank account of Val’s relative here in Sydney: