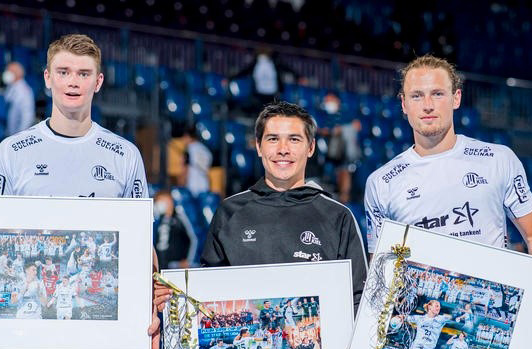 There is a big buzz going around in the community’s social media with great joy and pride. Bevan Calvert, Fil-Aus handball sensation is being celebrated as part of THW Kiel team’s win of the 2021 German Handball Bundesliga.   In a nail-biting last few seconds of the team’s last game in the Bundesliga season, THW Kiel drew 25:25 with its opponent Rhein-Neckar Löwen.  Based on all the points and goals earned during the season, THW Kiel successfully defended its champion title.

Bevan became the first Fil-Aus and first Aussie to have played with the team that won the Bundesliga Championship.  His photo holding his Gold Medal has been shared and commented on Facebook and Twitter.

Comments on FB posted include wishes from Bevan’s followers in Australia, Germany, Denmark, USA and Philippines:

From his Dad, John:

Our Champ played a part by replacing injured players and by doing so became the first Australian to hold the championship gold medal of the best handball league in the world. Proud of you Bev, your ‘never give up play’ has achieved your dream.
Taip Ramadani, former Australian Men’s Handball Team
Congratulations to Bevan! An outstanding achievement that we can all be proud of.

Congratulations Bevan! Vividly remember that day when you received the International Global Youth Award for excellence in their respective field from the late Atty Lolita Farmer @ NSW Parliament House and my son Warren

Cen Amores
The Filipino-Australian community should be very proud of the many accolades you have received, Bevan!!! We share the jubilation felt by your parents, John and Violi for your extraordinary success in the sport you have worked so hard and very passionate about since you were a young boy!!!.Keep going, anak!!!

Milali Frias,
Congrats Bevan! You’ve worked hard to get where you are now plus you have a bonus of 2 kids under your belt. Accomplishments to be proud of.

I’m still waiting for the Calvert merch to be available in Australia.

It’s not a dream, it’s true. Congratulations Bevan. And all the best for your new job

And you really were part of it, congrats my friend

Before the last Bundesliga game and at the last home game of THW Kiel, Bevan was also one of the three players who were given gifts of appreciation by the team.   It was lovely that the fans stayed back after the game and attended the presentation.

There was much clapping as Bevan expressed his gratitude.  He posted on his page:
“Thank you THW Kiel for a wonderful send off after the match yesterday. It was great to be amongst the team, officials and fans at the last home game of the season

It’s not goodbye but a see you later! You have my number if you need help again “

The report on the THW Kiel’s website stated:
“After the game, it was once again festive: The Kielers and their fans said goodbye to Bevan Calvert, Malte Voigt and Oskar Sunnefeldt, the three players who have helped them overcome injuries, illnesses and quarantine difficulties this season. Bevan Calvert (co-trainer THW-U23) and Malte Voigt (TSV Altenholz) stay in the north, Sunnefeldt moves to Leipzig..

Antonio Queiroz, formerly of  the Australian Men’s Team summed it all for us:

“Well done Bevan Calvert. You make us all proud here in Australia. What a great example of success  “