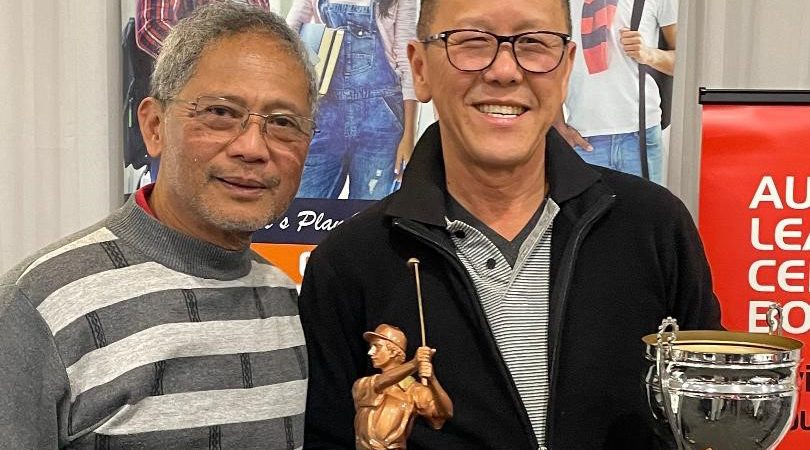 BY RIC DE VERA – Philippine Independence celebration on 12 June have extended to the annual prestigious event appropriately named in the Filipino word Kalayaan which means the freedom Filipinos fought for during Spanish colonization of the islands.

Frank Tan from Blacktown and member of Stonecutters Ridge Golf Club won the 26th Kalayaan cup golf tournament held at Twin Creeks Golf Club on June 14, 2021, to celebrate the 123rd year of the proclamation of Philippine Independence.  He scored unbeatable net 70 strokes under the modified stroke scoring system using his AGU handicap of 19. He was awarded with monumental championship trophy, plus $300 dollars cash (which he handed back to be donated to charity), gift from Expert Education & Visa Services and the privilege to engrave his name in the perpetual trophy. “Am very happy to win this tournament and congratulations to Kalayaan, Inc. for a well organised golf tournament” said Frank Tan with pride.

Despite the Covid-19 pandemic and resulting government restrictions, there were 112 golfers who participated; with another five more who wanted to play but beyond the deadline and were declined.

Novelty winners on all 18 holes were paid $20 each on all divisions for either, Nearest the Pins, Longest Drives and Best Drive and pitch, except for hole number 17 which was designated as hole-in-one with a cash prize of $10,000, of which nobody won.

At registration, pack of fruits & bottled water were distributed to all golfers. Along the way at the clubhouse entrance, coffee/tea and biscuits were also available. After the tournament, everyone was ushered to partake the sumptuous buffet lunch prepared by the Twin Creeks chef.

During the awards presentation, Cris Bacucang, President of Kalayaan, Inc. thanked all the sponsors, the golfers and specially the groups from ParE, Puro, Pogi, Fil-oz, Fijian and the ASEAN golfers, namely the Malaysian, Indonesian, Thai as well as well as Australian friends. He specially thanked the major sponsors headed by Expert Education and Visa services. “A big thank you to all the committee members who helped in the 2021 Kalayaan cup” he finally said.

The Philippine Ambassador to Australia, Her Excellency, Ma. Hellen B. de la Vega sent her warmest greetings to the participants and supporters of the 26th Kalayaan cup golf tournament. She mentioned the current theme of Kalayaan 2021: Diwa ng Kalayaan sa pagkakaisa at Paghilom ng Bayan (Spirit of Freedom in Unity and National Healing). She congratulated Kalayaan, Inc. for the successful hosting of the golf tournament every year in celebration of the Independence of the Philippines. She also thanked Kalayaan, Inc. for its contribution in building the friendship of the Philippines and Australia that spans 75 years this year. “May you continue to build camaraderie and sportsmanship among Filipinos and our peers and provide meaningful and lasting influences in the greater community.” she finally said.

The Kalayaan Organising Committee which was formed in early 2016 has the responsibility of organising, promoting and maintaining the annual Kalayaan Cup golf tournament in conjunction with the celebration of the proclamation of Philippine Independence. All members are volunteers and are assigned in different tasks. In May 2018 the committee was incorporated into Kalayaan, Inc. and Bob Leones was elected as the founding President. Currently, Cris Bacucang was elected as the incumbent President.

The Kalayaan cup golf tournament is now the longest running and well attended golf tournament in the Filipino-Australian golfing community in New South Wales. One of its objectives is to raise funds to be donated to the Missionaries of Charity in Tondo, Manila. This golf tournament is also the way of paying tribute to the Filipino forebears who fought for the freedom enjoyed by all Filipinos today.