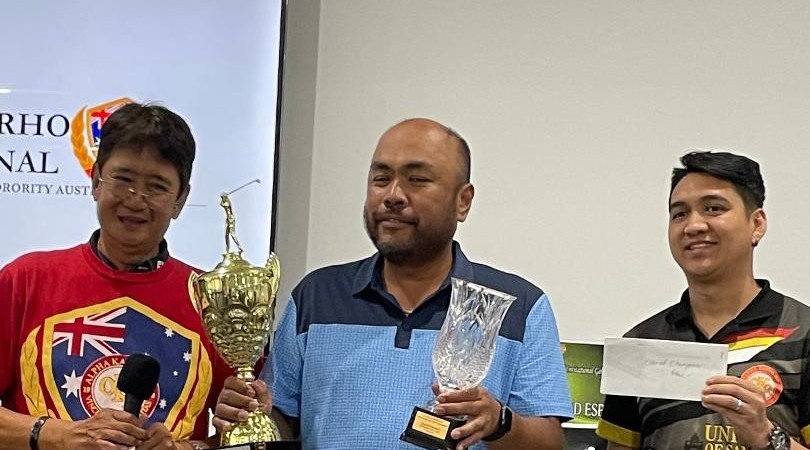 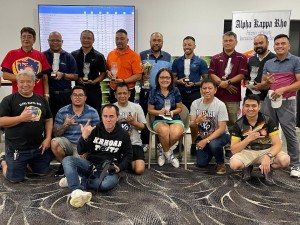 He received the champion’s trophy plus $400 cash prize and the privilege to engrave his name in the perpetual trophy. “It’s an honour to win charity event and well organized AKRHO team” said an ecstatic Rommel.

Division winners with their gross and net scores were: Alvin Bernaldo (79/64) for A and Jerome Gaerlan (80/63) for B. These division winners were awarded with trophies and $200 cash prizes.

Division first runners up with their gross and net scores were: Neil Narvais (75/66) for A and Jerry Valmeo (85/64) for B. These division runners up were awarded with trophies and $150 cash prizes.

Lady winner was Fidelis Badelles  with her gross score of 101 and net 79 using her handicap of 22 with Golf ParE Social club.

Novelty hole winners were paid $25 each on all 18 holes and the best putter was awarded with a trophy plus $100 cash. Raffle tickets of $10 per batch of 10 were voluntarily sold to participants with prizes of golf bags, caps, umbrellas, towels and golf balls.

It was initially reported that an amount of $2500 was raised during the event and the first donation would be to the Bicol typhoon victims. There is also an ongoing “Lapis at Papel” program during the start of school year in the Philippines where the beneficiary is a public school. There was also the feed the poor program around metro manila streets.

“In behalf of Alpha Kappa Rho International Humanitarian Service fraternity and sorority Sydney Council, we thank you all for your support” said Alex Cruz, Senior adviser and coordinator of the 2nd AKHRO Invitational golf tournament.

The Alpha Kappa Rho International Fraternity and Sorority is a fraternity established in the Philippines in 1973, comprising men and women from different universities to promote loyalty, unity and pride in the Fraternity amongst its members (Wikipedia).  Jaster Trine is the current Grand Skeptron of AKRHO Sydney Council.