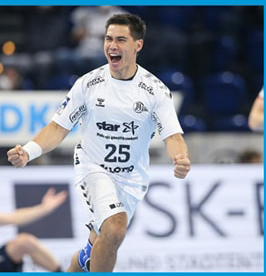 Bevan Calvert, the celebrated handball player of the Fil-Aus community and the Australian handball family has realised his dream in his chosen sport.  At the age of 34 years, just when he was all set to be less involved in high competition handball,  he got the opportunity to play for THW Kiel which is Germany’s top team and European Champion to boot.

Bevan was asked to help out THW Kiel when one of its players recovering from an operation is a Right Winger and another player sustained an injury.  This was in effect a recognition that his calibre and handball skills were up to the Champion Team’s level.

He made history in four counts.  That is by being the first Ausssie handballer to: play for Germany’s top team; play in the European Champions League; play in the German SuperCup; and to play and score goals in the German Bundesliga.

Bevan’s achievements and stint with the Champion Team were widely toasted by foreign media with newspaper interviews, podcasts, live interviews before the game.  Also in social media where in Twitter where posts about him gets re-tweeted and Facebook postings get shared around.  He also got featured in three major handball magazines and in websites.

In addition to his dream run with the Champion Team, Bevan was acknowledged to have been part of the European Champions League win by THW Kiel including him in the team list on the EC souvenir t-shirt rolled out in late December 2020.

There’s more!  The respected newspaper Kieler Nachrichten which holds an annual sportsman and sportswoman award, added the category “Surprise Athlete” and nominated Bevan as one of the candidates.

Kieler Nachrichten’s announcement of his nomination is as follows:

“Nominated in the “Surprise 2020″ category is THW right winger Bevan Calvert. The Australian left his homeland at the age of 20 to play professional handball in Europe. His dream of scoring goals at one of the big clubs came true 14 years later – when the likeable left-hander actually wanted to end his active career and start again as assistant coach of the THW-U23. It was different: Due to injury concerns, Calvert moved into the professional squad of the Kielers and thus became a pioneer of handball in his homeland: Calvert was the first Australian in the EHF Champions League, Calvert was the first Australian ever to win a title in Germany: In September, the 34-year-old won the Super Cup with the Zebras, and shortly afterwards the Sydney-born handballer made his Bundesliga debut with two goals. ”

Voting online is free, and closes on 16th January.  However, it is only open to residents of Germany and other parts of Europe.  If you have family and friends over there, please share the information.  Voting is through the link below; voters are put in a draw for a prize.  Let us help the Fil-Aussie handballer who has been waving the Australian and the Philippine flags in his sport. VC,
https://aktion.kn-online.de/umfrage/sportlerwahl2020…